Hi folks,
I’m confused about how to create, set index and write out very large dataframes.

here is a snapshopt of my task graph using a fraction of the data: 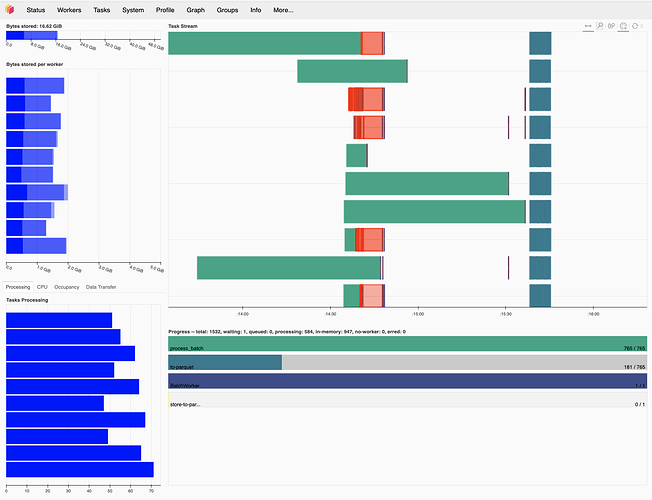 Question:
This shows that the created dataframe is stored in memory before it’s written out. This clearly won’t scale when I use all the data (I’ve tried it as well and it just crashed). How do I make this workflow scale to larger amounts of data?

First I’m wondering something: as you use Future to create your initial chunks of dataframe, Dask might not be able to stream the data. What I mean is: you are submitting the loading of all dataframe pieces at one as Future, never releasing the results. So I guess Dask just executes all of these and store it in memory.

I think you should use delayed for this kind of work, something like:

This way, Dask should be able to choose when computing the delayed objects.

The second thing is that, as you’re probably aware of, set_index is very expensive on a distributed system. You can find some tips on Dask documentation on how to optimize it if it’s the bottleneck.

Thanks for the reply!

I guess my question is actually two questions.

I need to scatter an object to the workers executing create_df (I didn’t show this for clarity) as it’s can be quite large e.g., a deep learning model or some large reference data.

Could you show an example of what you are doing? I’m not sure yet why it forces you to use the Futures API.

If we want to be sure, you could just test the code without the set_index call, and see how it goes. It might work a little better though, as set_index might act as a kind of barrier here.

I guess my question is actually two questions.

I think I need more details about the scatter thing to give an appropriate answer. I guess this is not the scattered data you’re trying to write?

It would be great not to use futures tbh, I find it all a bit confusing…but this is my code (without extraneous detail here):

Essentially I have 10 - 100k files which I want to featurize. The features I want to create might use a deep learning model or some large reference data (20MB - 2000MB). I create those features using a worker class:

the analysis is performed in this function by scattering the worker to each process, sending a small batch of paths to the worker transform method and getting a dataframe back (repeat until all files exhausted), create master dataframe, set index, write to disk.

Thanks for giving some code. I’m not sure, but I think your solution is over complicated, but I may have missed something.

I built some toy example to illustrate a simple case:

I hope this makes sense regarding your need. If I try to adapt your code, I would do something like this:

Does that makes sense? You might even be able to remove a for loop by using bags instead of creating your batches of files, but that’s another subject and probably not needed.

Wow, thanks for that great reply. That does make sense.

The question then becomes, if ddf is larger than memory then what’s the best way of writing it out with a ordered index?

If I try to set the index before writing it out, presumably dask would need access to the whole dataframe? i.e., this wouldn’t work:

Whereas this would work but has an extra write action:

do you have any advice or thoughts?

You have some answer to this in the set_index documentation:

If I try to set the index before writing it out, presumably dask would need access to the whole dataframe?

Documentation says it needs to pass over the data twice. This doesn’t mean it will load all the data in memory at the same time. So in theory, even the first code you propose should work.

However, this is probably much safer to write it to disk once before setting the index, this will avoid re-computation of the data and potential spill to disk. And there are probably some optimization with Parquet format that will be used by Dask.

In the end, I would advise you to just test, first at a smaller scale that your whole dataset, and see what happens

OK, point taken. Thanks very much for your help. It’s good to know I’m not missing something really obvious (beyond what you’ve already pointed out about the delayed functions and scattering).

Thanks for your time and help.